Annette Sullivan (maaskowishiiw fleur), is a professional artist of Metis and First Nation heritages, and two-spirited. They studied drawing, painting, and textiles at Beal Art, London, ON Canada. Following that, an internship of billboard painting and a study of commercial art at Mohawk College transpired. A successful career in graphic design ensued.

After the passing of matriarchs in their family, Annette was compelled to paint the stories of native ancestors. Ancestors’ stories reflect earth wisdom combined with the concept of cultural sustainability are featured in the works.

Annette’s colourful images in the Woodland genre offer insight on topics of historical trauma, placemarks; indigenous ways of being.

Family are members of the Muskrat Metis of the St Clair region. “Muskrat” (Mushrat) describes a language and a people; whose French-Canadian voyageur grandfathers worked the fur trade in the waterways and tributaries of the Great Lakes. These men married Native American women. The unions melded ways that resulted in a unique culture featuring its own style of art, music, dance, dress, food and spirituality.

Annette was extremely fortunate to have been immersed in Metis culture since youth. Their Saulteaux (Ojibway-Cree) Grandfather was a Metis fiddler, a whittler, and a farrier. Their Grandmother was a craftsperson and seamstress. Both: avid storytellers credited for sharing traditional indigenous teachings. 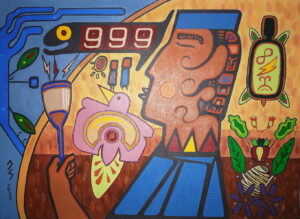 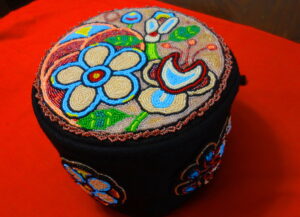 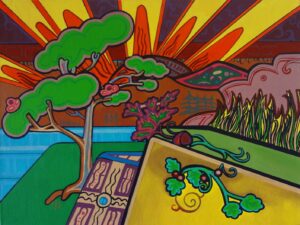 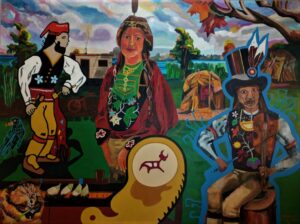